The new year has arrived, and the days have been growing longer for a few weeks now. The season of retail madness is over, as well as finishing my first college degree; this past semester I completed a Bachelor’s in Psychology, and this upcoming year I plan to finish a second degree that has been sitting on hold for the better part of ten years. So yes, I’ve been busy, but it still shocked me to realize how much time has passed since I last wrote. It doesn’t help matters that the day after school let out for the semester- the day that I hoped to finally get back outdoors after the constant grind of work and school- I tripped on the stairs on the way out to the car and whether I broke my tailbone or just intensely bruised it, it still hurts now, weeks later.

Schedules finally aligned on the last Sunday of the year so we decided to do something awesome and headed to Kentucky to visit the Newport Aquarium. It’s about a two hour drive from Indianapolis, right outside of Cincinnati, and though not far, it doesn’t fall on one of our common travel paths. I hadn’t been there since elementary school, but was excited to get a chance to go back.

We arrived early and spent about an hour walking along the Ohio River Levee before we went in and perused the tanks with the other early-morning people. In steps, we traversed continents and dove deep into the oceans; wonders awaited us throughout. At one point, an enormous loggerhead turtle arose from the depths, pausing to peer at us briefly through the glass before swimming on with unhurried strokes. Loggerheads are endangered, with only about a .1% rate of survival from egg to adulthood in the wild; therefore, aquariums such as Newport have begun fostering some of these turtles for their first year of life and then releasing them. The picture below is their current resident, Denver, and some of his neighbors. 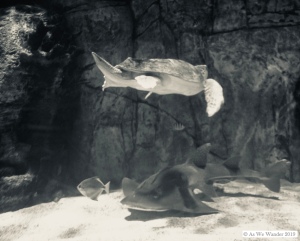 Elsewhere we found the jellyfish. They’re beautifully surreal, both to the eye and the anatomist: they drift, dragging tendrils like lace, and assuredly they have no cares, with no brain to house them. The humble jellyfish has been floating along for over six hundred million years, and bioluminescent proteins in one particular species have been used as biomarkers for medical research, while other research has focused on the apparent paradox of a living creature with no central nervous system. 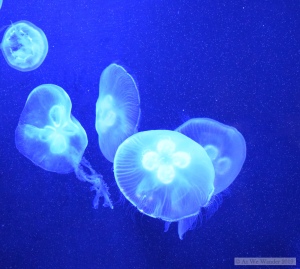 The arapaima is another fascinating inhabitant of the aquarium, monstrous and prehistoric. It is sometimes referred to as a dinosaur fish, due to having existed in the fossil records for millions of years with minimal changes. Even with such extensive history, though, we know relatively little about this fish; their conservation status is listed as data deficient, although scientists such as the one in the article above are working on learning more about them. What we do know, however, is that they are massive, similar in size to the sand tiger sharks discussed below, and that these predators’ tough scales are impervious even to the teeth of their better-known Amazon River companion, the piranha.

Finally, what is an aquarium without sharks? I’ve always had a soft spot for them, between their ominous reputations and their many contradictions. The first dream I remember as a child- more a nightmare, to be accurate- featured one, along with my own apparent demise in a setting oddly similar to the one in which I found myself at Newport. In the dream, I was deep underwater, walking a path enclosed with glass not unlike an aquarium tunnel. It was very dark, with only the weak light that dreams always thoughtfully provide when a doom approaches that must be witnessed. A shark lazily glides by, and as it pauses for another look, the glass begins to crack.

That is all, as the dream itself goes; but the freshly minted psychologist in me wants to break down the concepts and draw parallels that may or may not be accurate. What I do know is that those were the first stirrings of a love for the ocean and what I would like to consider a healthy appreciation for its power over a simple human. Or maybe it’s the desire to shed light on the secrets of the deep sea and its varied inhabitants; whatever the case, the effortless power of the shark has always held some fascination for me.

When this shark swam above me it was like a cloud passing over the sun. The sand tiger shark is another creature found in the aquarium, a shark that can reach up to ten feet long and whose vicious-looking teeth belie its personality. This nocturnal predator is much more interested in having fish for dinner than humans, and it is particularly notable as the only species of shark known to surface and gulp air, which is then stored in their stomachs to help them maintain neutral buoyancy. As a fledgling SCUBA diver, I totally understand the need. 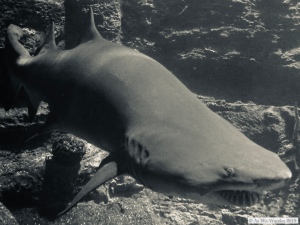 While I try to find myself outdoors for adventures as much as possible, this was one exception that was incredibly worthwhile. Here we could avoid the December chill and see amazing things that would not be accessible on a hike, not to mention the fact that it was a short trip to spend a fantastic day with the family and the denizens of the seas.