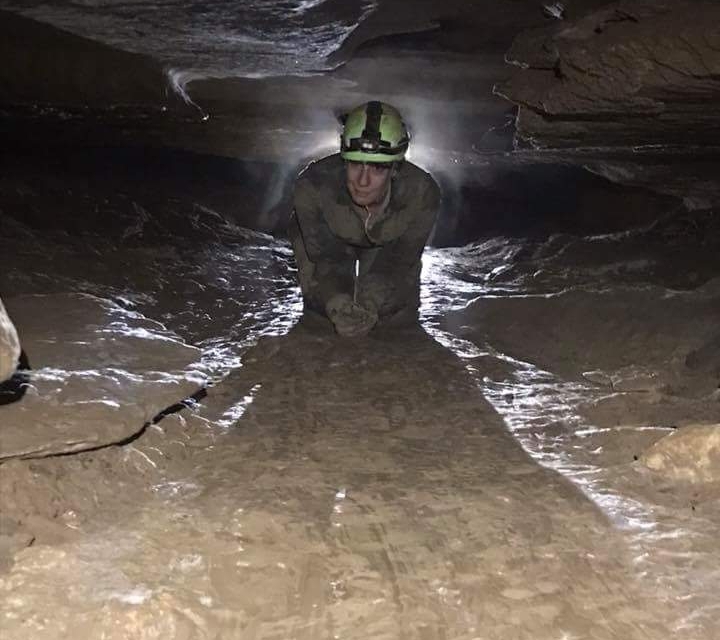 This weekend, I made my way to Bloomington with the illustrious Carl and our good friend Sam in order to spend the day navigating Wayne’s Lost Cave, an Indiana classic known for its difficult crawl. Both of the guys have already been there several times this year, although this was my first time since October of last year. We were attempting to make it to survey camp 4, effectively at the back of the cave; this would be a first for both Sam and myself, and only Carl’s second time back there, the first being two years ago. 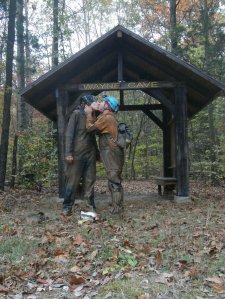 As I begin writing this piece, I face an issue in deciding exactly who this is written for. By this I mean, do I assume that there is some understanding of caving jargon and layouts, or do I start from zero? As many of my readers are not necessarily cavers, I will do my best to be clear in my explanations. It’s a practice that I find especially meaningful regarding this particular cave, considering my own history with it, and the chaos that was my first trip there.

Wayne’s is one of Indiana’s more difficult caves, boasting an incredibly varied topography. The entrance is secured with a heavy slatted gate, designed to keep people out but to allow free passage for bats; once that is opened, the cavers climb down an about 11 foot chimney, avoid a hole that waits to catch a leg, and then make a second climb-down of about the same height. From there, there’s a crawl of a few feet to get into the area known as Historic Wayne’s, which is a large decorated borehole passage. We strolled through this and took a few pictures, then doubled back to enter the infamous crawlway, an uninviting hole in the wall off to the left when facing away from the cave entrance. We drop down to hands and knees and enter the crawl, thankful for our kneepads as we navigated over river rock, which eventually evens out to just muddy rock. Over its quarter mile, the crawl varies in height and difficulty: the entry, though irritating as one splashes through puddles of water, is the least of it, considering that the crawl constricts, resulting in such areas as the Why-The-Hell Squeeze and the Torpedo Tube. As one can imagine from the names, these areas are small, and the type of crawling required through the crawlway is varied: in some places, hands and knees are appropriate, but others require a belly crawl, and the Torpedo Tube particularly is a question of pulling with your arms while pushing with your toes, as there is no more room than that in order to get leverage to move forward. Thankfully, there are some places where the crawl opens up a bit: not enough to walk, but enough to at least sit up and take a break. 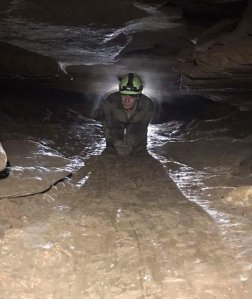 At the end of the crawl, cavers must negotiate a slot canyon that opens up below. This canyon is narrow and tortuous, so the best bet is to continue above it; the canyon opens along with the crawlway then, and in order to not fall into it, one must keep left onto a shallow ledge which skirts the rim, sloping down into the canyon.

On my first trip to this cave, a friend (with the best intentions but not always the most sense) decided to bring some friends of his along. Introducing people to caving is great, and in itself not necessarily problematic, but they had never been underground before and quickly discovered claustrophobia. It was near the end of the crawlway that this came to light; behind me, I kept hearing snatches of conversation, mostly consisting of different iterations of “are you okay?” and “what’s wrong?” I turned around when I reached an area open enough to do so and headed back toward the conversation, which was falling further and further back behind. I found some of the new people then in the next open space back. One was crying, and another didn’t look to be faring much better. The others were willing to continue, but lingered as to not leave them behind. Sam was also along on this trip and had taken the “tail-gun” position, bringing up the rear of the group; he sat with them, trying to determine what to do. Meanwhile, the group was separating, as another one of the new people had also declared himself claustrophobic early on, but insisted that he would be fine as long as he kept moving; we had placed him in line directly behind the trip leader, and when I turned back to check on the rest of the group, they continued on. Sam and I discussed, and ended up deciding that he would take the people willing to continue on to catch up, and I would lead out the ones nearing panic. I saw no reason to encourage them to continue; at that point, they were becoming a liability, and although I wanted to continue on, I was not willing to endanger the rest of the trip in the hope that they might calm down.

So we backtracked. Although it was my first time in Wayne’s, the crawl is pretty straightforward, though painful, and in the few places that I was unsure of the way, I was able to pathfind based on the traffic marks. Slowly, we made our way out of the crawl, breaking often to rest, eventually making it out of the crawl, through the historic section, and back to the drop-down at the entry. 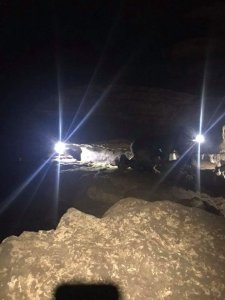 Here we ran into another issue, as by this point, the two who I led out were exhausted and demoralized and unable to make the climb up and out. I tried to boost one up on my shoulders, but unsuccessfully; the other didn’t try. After a few minutes of this, I told them to stay put and went to make the climb out myself to get rope from the vehicles. The friend who had brought them had backed out himself at the beginning of the crawl, and would be somewhere outside hanging around. Between him and the rope, we would get them out.

I made the first climb up, then the other, unlocked the gate, and pushed. Nothing happened.

I pushed harder, balanced on the edge of the drop-down, trying to stand to leverage my leg strength against the gate. I put my head against the gate too, and pushed as hard as I could.

The gate opened an inch, and fell shut with a clang; the two who I had left below heard this, and started shouting panicky questions to me about what was going on. Finally I lay on my back over the ledge and kicked the gate open, yelled down that I would be back, and headed up the hill to the parking area. Thankfully, the friend who had backed out was napping in his car, so I woke him up and we retrieved the other two.

Thankfully, this more recent trip had none of that drama, although we may have whined some about the grit in our kneepads and a stinky stagnant puddle. We negotiated the crawlway and the ledge into the Camp 1 canyon, then headed down borehole passage toward Breakdown Mountain. This is a huge pile of rubble fallen from the ceiling in what would otherwise be an expansive chamber. We scrambled up it, calling out loose slabs and stones to each other, then we headed on through the main passage, littered with more breakdown, until we reached Deep Gorge, approaching Camp 2. Here we reach an area similarly sketchy to the ledge leading into Camp 1, but with heavier consequences for a misstep- a tumble into the Camp 1 canyon means a fall of maybe fifteen feet, while the Camp 2 canyon’s depth is more like forty to fifty feet. A natural bridge hangs over Camp 2. Following it would lead to an area of the cave called Helictite Holler, and other passages break off here as well, including the one that would lead us to Camp 4. Here our pathfinding failed us, though: although we started down a few different passages, none led us where we wanted. We ended up following the American Bottoms passage, which boasted some formations, then ended up back at Camp 2; we pulled out the map and compass at that point and tried to find our missing passage. A major difficulty with cave maps, especially in a multi-level cave like Wayne’s, is the fact that these two-dimensional representations tell us little about whether a desired passage is on the same level as us, or perhaps above or below. We bandied around the idea of heading instead to the RPI Passage, a passage that breaks off near Camp 1 known for its “pretties,” but eventually we made the decision to just head back, research, and make another attempt on another day, armed with better information. 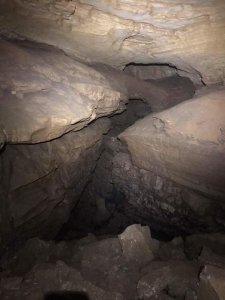 Although brutal, Wayne’s is also beautiful, and though I may complain about the bruises I always wear afterwards, this cave is quickly becoming a favorite of mine. Each attempt I make, it gives up more of its secrets; perhaps next time, we will finally make it to Camp 4. 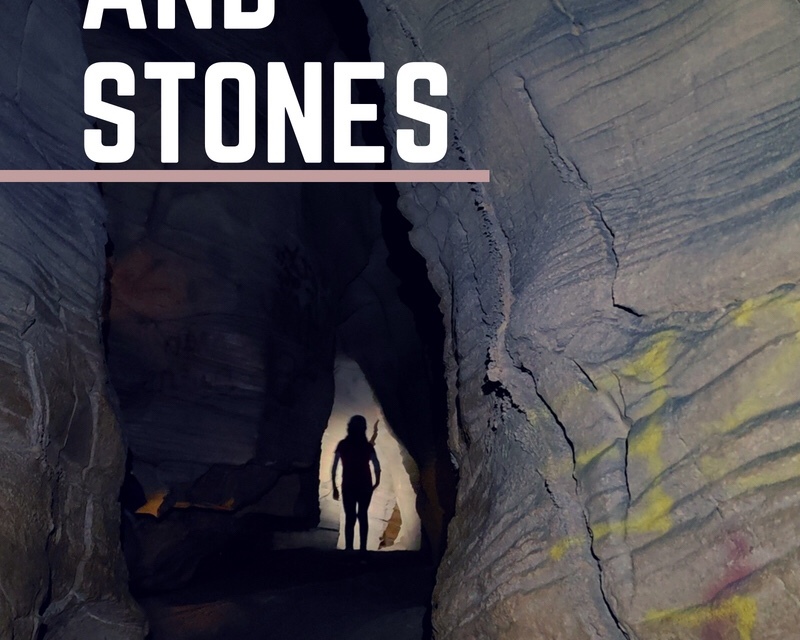 This week’s post is something a little different. It’s a write-up of Kentucky’s Sinks of the Roundstone cave, and it is available exclusively on As We Wander’s new Patreon page! I’d love for you to check it out. If you’d prefer to wait for free content, stay tuned and next Monday we will return with The Land of the Spiders, a hardwood forest that only looks empty.