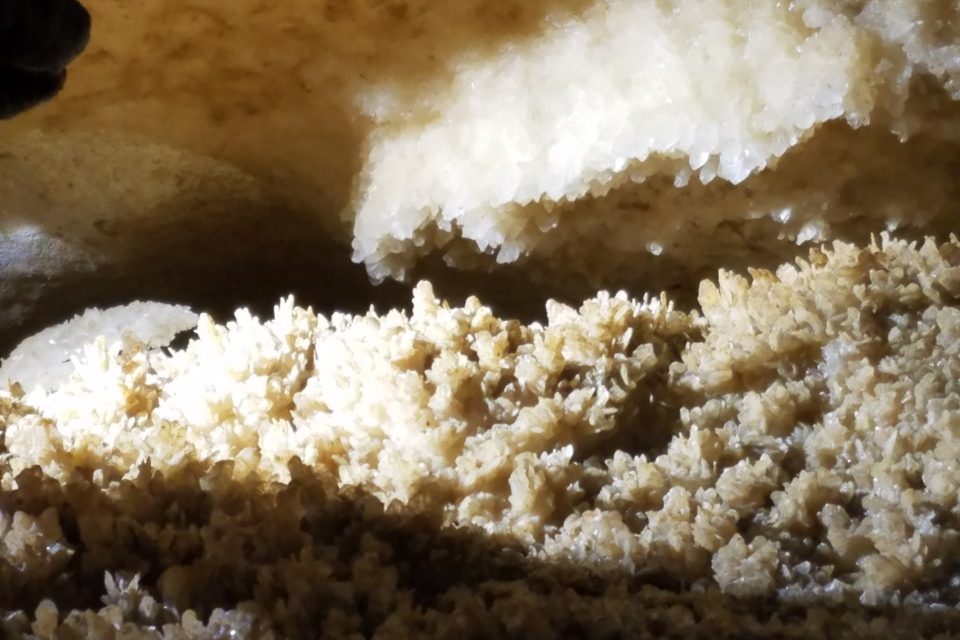 Winter has come to a close, but we have not been idle. Life has been the contrary, in fact, and recording it has seemed as futile as trying to catch a hurricane in my hand. Changes have occurred. Perhaps it was the hurricane, whose whisper we heard in the trees from our camp atop Georgia’s Lookout Mountain in October, or it could have been the inviting darkness below. Maybe it was the dreaded “L” word that people utter sometimes that upset the rhythm. Whatever the case, our little team of recurring characters has inexplicably grown from two to four, after the efforts of a friend who couldn’t mind his own business.

Hanging out at Raymond Cave

“You should meet my friend.”

“I don’t really care to meet your friend.”

“But he’s just like you! He’s a single dad and has a daughter and they go on adventures.”

“Robert, I don’t want to meet your damn friend.”

Long story short, we met Carl about ten minutes later, and the rest is history. Of course, there’s few buzzkills like that for this kind of writing project- how does one deal with the new character? What an embarrassment it would be to introduce him and break up a week later. People frown on killing off characters in real life, although The Vandals dealt with it well enough in their song “My Girlfriend’s Dead.”

“I call it leukemia/ or sometimes bulimia/ or some great big truck ran her over, and chopped off her head/ I don’t wanna talk about her/ someone always asks about her/ so I tell them all my girlfriend’s dead…”

So guys, if Carl suddenly has a tragic accident or goes house-hunting in Siberia one day, don’t give me a hard time. Just roll with it.

Since this plot twist occurred, our adventures have not necessarily taken us so far geographically, although they have shown us wonders few eyes get to see. In January of last year, we were in New Orleans, exploring the city from our home base at the beautiful historic Streetcar Inn, listening to authentic Preservation Hall jazz, and eating po’boys as we strolled along the banks of the regal Mississippi.

This year’s start found me in a hole in the ground only a couple hours from home, but what a hole it was. Buddha Cave is located in Mitchell, Indiana, somewhere in a field that’s somewhere off a road. Thankfully, I was not the one providing the directions so we got there with no issue, suited up, and hiked through the muddy field to the cave mouth which suddenly loomed before us, draped in last autumn’s leaves. Some of our dozen-or-so group members rockhopped around the stream that flowed into the cave, while others chose to slog right through it- we would all have wet feet eventually, so there was not much point in delaying it. The entrance sloped into a room, dimly lit by the sunlight that attempted to venture in and failed. If not for the ladder set up against one of the walls leading to a ledge overhead, the cave would have appeared to be a dead-end aside from a small passage carved by the water’s relentless flow to the lowest point. We were spared the drenching by heading up the ladder instead into a passage where we were able to walk crouched over until it opened up to an area where everyone stopped and began to unload their packs, pulling out harnesses and equipment that would allow us to navigate the thirty-foot rappel down to the next level of the cave. This was a new experience for several of us, including myself, Carl, and his daughter; my daughter was not present for this trip due to the technical aspects of it, although I plan to take her back when she’s a little older. It took a while for the group to harness up- in my excitement to descend it felt like years- during which time I wandered off to explore a side passage to curb my impatience. The passage itself was a muddy crawl, not necessarily spectacular in and of itself, and I turned back when it got uncomfortably low, killed my light, and lay back to wait. The darkness of underground is something that must be experienced to be fully appreciated- rather than simply the absence of light, it’s like an entity of its own that lingers beyond the reach of our headlamps, patiently awaiting its chance to approach. What a nightmare for claustrophobics, I thought, as I lay there at ease in the low muddy tunnel, wondering how many tons of rock and dirt were suspended above me.

Finally it was my turn to descend. After a crash course from veteran caver Charlie Vetters, I attached to the rope and headed down.

It’s hard to describe the feeling of abandoning that old friend, solid ground, and descending into the void. There’s a certain sense of trust required to step over the edge, followed by one of exhilaration; the descent was over in a moment- too quickly- and I found myself face to face with a thundering underground waterfall. The passage ran along behind it and we followed it through, navigating columns and flowstone until the passage narrowed to a low crawl with water nearly the ceiling, at which point we turned back. We exited by freeclimbing around the corner from where we descended, pausing first to clip onto rope as a safety precaution before hauling ourselves, muddy and tired, up and then out of the cave. We stayed that night in the bunkhouse of a summer camp that was closing down, drinking and making merry with our caver friends before heading back to Indianapolis the next morning.

Other cave adventures have both preceded and followed that trip, including the gorgeous Tumbling Rock of Alabama and Raymond Cave of Kentucky, totalling fourteen wild caves since our initiation into community last summer and that number will continue to grow; as I began this, we were passing through St Louis, the arch looming behind us, on the way to do some caving in St Robert. From there, we headed south to Arkansas to spend the rest of the week exploring the Buffalo River by Jeep, backpack, and perhaps canoe.

The landscape changes around us as we drive, turning greener than at home, as if their spring began earlier than ours. Karst features become apparent as rock walls thrust themselves out of the ground like giants struggling to free themselves from the clutches of the red clay. We count fifty billboards for the show cave Meramec Caverns as we drive farther into Missouri but we pass it and continue. We have bigger things waiting for us.

One Response to “Back to It”